In 1986 after an inaugural meeting at the Commodore Hotel in Cobh, a group of 150 Cobh People paid each £150 to start a new Golf Club and with it the construction of a new Golf Course at Ballywilliam, at the east end side of Cobh. 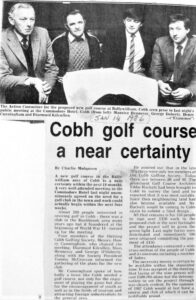 The land was leased from a local farmer, after redevelopment plans of a former short-lived course at Newtown were refused in early 1985. Over the coming 15 months, Bob O’Keeffe (who also built the Semple stadium in Thurles) built the 9-hole course to the plans of well-known golf course architect Eddie Hackett.

The first home of the club was a family cottage formerly owned by the Barry family which was converted into a licenced clubhouse. 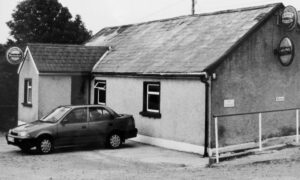 The course was opened to members over the last week of June in 1987. An official opening day followed on 04th of July 1987. Christy O’Connor Sr played as honorary guest in a 4-ball with John Morris Jr, George Mellerick and John McHenry (see below).

A ‘Golf Clinic’ was also given by Christie O’Connor. The official Opening Dinner was thereafter held in the Commodore Hotel.

The Ballywilliam golf course would be played as a 9-hole course for the next 22 years. From the mid 1990s, the club had grown to a membership of more than 350 Gents and Lady golfers. The first clubhouse was however, demolished and replaced by a new build that was opened in 1996.

Plans for an extension of the Ballywilliam course were often discussed, but an appropriate site for another 9 holes could never be acquired at Ballywilliam. So, it was decided in 2005, to make plans for a brand-new 18-hole course. Land should be acquired if and when sufficient land became available anywhere near the town of Cobh.

In 2006, a 125-acre site at Marino Point in an elevated position overlooking Cork Harbour and Fota Island came on the market. The Club members raised over €1m to acquire this land. However, planning delays unfortunately meant, that work could not commence until 2008. All funds were invested into the new course. The course was completed in record time just over 12 months later.

The unofficial opening of Marino Point Golf Course for members of the Club took place in June 2009. In the first year after play started, the course was brought into excellent shape.

Shane Lowry, the 2009 Irish Open Champion, then officially opened the new course to the public in July 2010 and in good tradition, played a game (yes, his balls at the 10th ended in the water!). He gave a golf clinic to members of the public, who had arrived in hundreds to celebrate the opening. 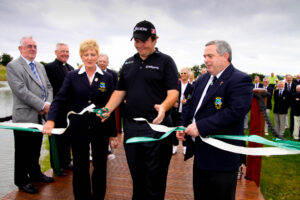 The construction of the new course had been carried out in the mid of the financial crisis, and the sale of land at Ballywilliam, which was supposed to finance the new clubhouse, unfortunately fell through. For two more years, three portakabins served as provisional tea/coffee room, changing rooms and shower facilities.

A larger provisional clubhouse was then built and completed by members in 2011 – on a mainly voluntary basis. The Club had attracted over 600 members at this stage, and many Juniors had started playing and availed of the new course and training facilities.

Over the next few years the course went from strength to strength, but it became necessary to upgrade the provisional clubhouse. In 2017, sufficient funds were raised to carry out a refurbishment and bring the clubhouse to the required standards. The new clubhouse now features modern changing room and shower facilities as well as a luxurious lounge and restaurant area, which is served by fully equipped kitchen facilities.

The opening of the newly refurbished clubhouse coincided with the 30 Year anniversary of Cobh Golf Club.

With the now matured widely-praised excellent course, an on-location fully equipped Pro-shop and the modern clubhouse facilities, the future of golf in Cobh looks brighter than ever.

In 30 years, Cobh Golf Club has remained members-owned. The club is run and managed by golfers for golfers. Membership fees have been kept reasonable because voluntary work and genuine enthusiasm for the sport have contributed greatly to the success of the Club over all the past 30 years.

Today, Cobh Golf Club is one of the highest-rated courses in Munster, and provides a genuine and spectacular challenge to high- and low handicap golfers.

Greenfee players and Societies are warmly welcomed. Come and be part of a great golf experience!